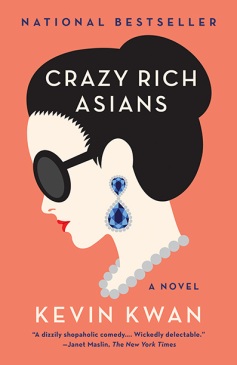 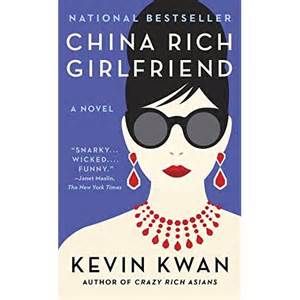 Time on to-read: A year or more for the first book, second wasn’t on it until I read the first.

Reason for not picking up: Straight up perversity. The hype annoyed me. It seemed like a standard-issue chick-lit that happened to be set in Asia. And while I like many novels typically dismissed as “chick lit”, usually they are dismissed as such and looked down on. Why was it suddenly super cool and intellectual to like this one, out of all of them? I rebel against your special child, critics!

Reason for finally picking up: ….okay. Fine. I need this kind of book right now- if it’s really going to engage me, then I’ve got to try it. I will end my temper tantrum about it. FOR NOW.

Verdict: Sure, I enjoyed it. Fine. You win.  (But I kind of still don’t get the breathless hype.)

I’ve run into a few great writers lately, which means I’ve been reading fewer of them. No sooner do I discover them than I tear through as much of their catalog as I can. Maybe it’s just that I’m getting pickier, and it’s harder to find books that fully engage me without turning on my critical brain and tearing it apart- but when I do, it’s like striking gold. Kevin Kwan’s first two Crazy Rich Asians books fell into this category of riches. I pretty much inhaled them whole over the course of a week in a series of positions on various soft surfaces, losing hours happily to them, just like I wanted.

The story is a typical fish-out-of-water Cinderella tale, with Rachel Chu starring as our bewildered fish. Her boyfriend, fellow professor Nicholas Young, invites her to spend the summer in Singapore getting to know his family- without telling her anything at all about them. Like the fact that they are, indeed, crazy rich. And even more so, that they are part of what has come to be considered the hereditary upper-classes of the country, the sort with money so old that nobody is supposed to even remember where it came from. And so, of course, he is a secret prince of this society, with many a fair maiden on the catch for him! And there’s court intrigue and to spare as we spend more time there. It becomes clear to Rachel that she is seen as a dirty, interloping Cinderella who will prevent the brilliant marriage his family considers is Nicholas’ by right….!! The second book makes it even more complex- without spoiling you on anything, trust me, SECRETS WILL BE REVEALED.

If it all sounds super melodramatic, and exactly the plot you’ve read a thousand million times, you are correct. It is. But the novelty for many readers (at least many non-natives to these countries) will be the book’s ability to open a window onto an aspirational culture that many of them have no hope of ever participating in, or maybe didn’t even pause to think existed. Indeed, the book reads like half story, half explainer for the uninitiated into South Asian high society. There are footnotes! (When’s the last time you read a brand-name filled Cinderella story with footnotes?  Never. Never would probably be the answer.)

And at first, the world is completely fascinating. I love discovering how different worlds operate, and if you have that similiar weakness, you’ll really like this book too. The most interesting part to me was seeing how privilege operates in countries with a history of colonization: what happens now that there is money and the privilege of actually controlling it yourself? (Well, they repeat the patterns of their colonizers, is most  of the super interesting answer. The way they conceptualize class has been imbibed from the English like a disease, the same way you’d find similar ideas about old money in certain New York and Philadelphia families.) The other interesting thing to explore is, of course, not only that the people this book focuses on have money. They have INSANE amounts of money. They have more money than God. All the gods. There is so much money that spending a million dollars is like going out and buying an ice cream, something wives do on a whim and go “oops!” if they don’t like whatever it was they spent it on, and throw it in the basement for a servant to maybe or maybe not find years later. There is so much money that characters refer to people as having “400 million dollars AT MOST!” and pity them like they are second class peasants. There is an absolutely AMAZING scene where a bunch of girls try to talk a friend out of marrying a guy she really likes (who is ONLY an executive, making nearly a million dollars a year) by listing all the expenses, with incredibly accurate math, of maintaining her current lifestyle until she breaks down, realizing she will become exiled from everyone she knows if she marries this guy she loves, and that is a fate worse than death. Oh man, I loved that scene so much.

But it does get sort of mind-numbing after awhile, is the thing. Particularly if you tear through both books together, like I did. While there’s some eye-popping pleasure watching a group of ladies lay waste to every luxury house in Paris, and it’s absolutely incredible Kwan’s ability to know exactly which brand is right for which moment, it became too much for me. It was so in your face it was hard not to be knocked out of the fascinating anthropological exploration into just seeing lists of brand names and fancy places and endless descriptions of wealth until it became less fascinating than absolutely nauseating. It’s hard not to start doing calculations in your head about how many world problems could be solved with this kind of money and start wishing for some sort of revolutionary subplot where at least one of the daughters or sons of these people would go rogue and burn it all down- Rachel and Nicholas and their pious, middle class morality don’t really cut it at all for me. (Look, I liked Madame Bovary, okay? I’m not that person.) I really don’t think this was totally intentional. I think Kwan just sometimes got really carried away with it all and could sometimes get lazy and spend pages describing money and luxury objects instead of advancing plot or developing his characters. I mean, granted, dude, you have a great world to play in- I get wanting to glory in it- but maybe not until I can’t remember what last happened to your character because its buried under a pile of Prada and 18th century teacups, you know?

What kept me reading were the characters. Oh no, not the main characters though, which is super disappointing. Not Rachel and Nicholas- they were boring as hell, sorry guys. Not only were they boring, they got wearingly tiresome to have any sort of conversation with- instead of feeling like my lifeline to sanity and my stand-ins and guides to the OMGWHUTness of this, as they should have, they came across as a waste of time. My favorite by far and away was Astrid. Her conflict with her husband and her family was farrrr more interesting and mature than anything those two have going, as well as her outlook on life and all the people around her.  And that held true even when I spent more time with her, which isn’t always the case with initially mysterious characters. Collette in the second book was also great, as was Charlie- I can’t tell you more about them because spoilers, but rest assured you will be delighted with them and what they represent. And there were other characters I liked and we didn’t see nearly enough of like Nick’s father, Collette’s father in China Rich Girlfriend, a spoiler character that I can’t name because you have to read the first book first. Basically, all the people who had to actually live in this world and navigate it in their own way, trying to maintain some personal integrity in the circumstances, who weren’t eaten alive by money, even if they were totally defined by it, if that makes sense. These characters are all super-aware of what their world is, and some of them are still struggling with it, some have made their peace, but all of them don’t hide from the truths they live every day. It’s far more interesting to watch that than all the outside, tsk-tsking disapproval you like, and everyone else is just dollar signs incarnate. I hesitate to praise Kwan totally for these characters because sometimes I felt like I liked these people just because they were the only ones he spent any time with (other than Rachel or Nicholas, who totally fail as main characters), before going back to talking about money some more. But some of it, at least, was skill for sure. His skill at rendering the minor characters proved that at least.

(I think Kwan should try his hand with old-fashioned farce in the future, by the way. His handling of ridiculous characters and their great one-liners suggests he would be great at it.)

Like I mentioned, there’s a third book coming out. I’m really hoping that he’ll veer away from the formula of the first two books- picking an Asian country to plant his boring main characters in and explaining how their class system works, interspersed with orgies of money- and really reward his readers by looking harder at the worlds he’s already created and spending more time thinking about the best characters he’s already shown, and showing how they make decisions and get on with their lives when it gets even more complicated. I somehow doubt it- this is a book of its genre for sure, and man people like a good formula, and like a formula with a twist even more, and these books have a pretty good twist. But there’s enough good in here for me to wish that the author and publishers will allow this story to develop, rather than swimming in place. You’ve already got a lot of critics’ ears with this series. Why not use it to show what you can do by playing with the conventions?

We’ll see. I still recommend these in the end. But maybe space them out, and maybe tone down whatever expectations you have after reading the reviews by about… oh 20%. It’s still pretty good, but simmer down just a little bit about it.