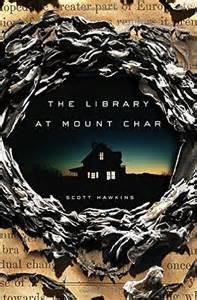 Time on to-read: Eight months or so

Reason for not picking up: Honestly? It didn’t seem that popular at first and I thought maybe my instincts were wrong when choosing it- by the time the praise took off, I didn’t have time.

Reason for finally picking up: Absolute RAVE reviews from the people who did go through with reading it.

I can’t say I ever expected to write a review about how I cried over a lion-on-ghost-dog fight in the streets of suburbia, but here we are. Turns out it exists, the book that can make you do that. And it’s this one.

The Library at Mount Char tells the story of Carolyn Sopaski. What that story is we only gradually find out over the course of the novel, in fits and starts of flashbacks, but at the beginning what we know is that Carolyn and her “siblings”, eleven of them, are “librarians” in a very unusual and intense library. Each of them is in charge of a section of knowledge- healing, war, mathematics, speaking to animals, or Carolyn’s specialty, languages- knowledge that they have gained in such depth that they have each acquired a mastery so acute so as to appear to be magic. They are ruled over by “Father”, a sinister, powerful figure who adopted them all after an unspecified disaster and put them on their course of study and gave them the sort of abusive childhood that you might imagine the a child of Ramsay Snow and someone much more horrifyingly psychologically astute in the deep ways of torture might have created. (Perhaps I can best illustrate the brutality pictured by saying that one of the most horrifying features of his upbringing is that there was literally no way out- you could be resurrected if you tried suicide- and then punished even worse for having tried it. And you probably tried that suicide after one of your dear siblings killed you on purpose. For fun.)

Carolyn and her siblings stir up a great deal of trouble for a great many people after Father suddenly goes missing, and, as they work towards finding him, they make their presence in the everyday reality of America known increasingly terrifying and hard-to-ignore ways. And then, of course, things really go to shit. And it’s absolutely fantastic.

The plot is the major high point and fantastically wonderful strength of this novel- I read a lot of books that nearly totally dispense with plot so I don’t need it to be to love a novel, but when it’s well done the way this is, it is truly a pleasure to behold. Especially since he’s able to really walk an exquisite tightrope of throwing us into the action of the plot right away and keeping up the pace without having us be too confused about what’s going on. Mostly that’s due to the excellent work he does with structure- he intersperses present-day plot with flashbacks that dispense background, information and character revealing anecdotes as needed, but without ever really detracting from the atmosphere, suspense or tension of the novel, which is quite something. He always explains just enough but not too much- just enough to make you think you’ve got your bearings before we move on. The beats of it are perfect- this is the rhythm of someone who understands what the reader needs to feel like to stay inside the story and stay invested in the characters, and how many resources he needs to allocate to each of those tasks.

There are also, I must say, some wonderfully suspenseful action sequences throughout this novel, and this despite my own personal tendency to find standard action sequences rather boring these days. Hawkins made his anything but boring by presenting them a scenes of ugly, brutal chaos without ever romanticizing what’s happening and also injecting a great deal of gallows humor into the thing. But he is relentlessly mundane in his descriptors, and smartly uses some true Everymen to inject some decency into the increasingly insane cast of characters in a way that sometimes adds to the hilarity, but can also tip the scales of what’s going on into true poignancy (I’m telling you! That lion situation! I couldn’t handle it!). The reader can easily imagine themselves in the mundane settings and situations, with the feelings of our Everymen, but without ever feeling pandered to, like they are some ongoing exposition monster that the plot gets fed to.

The beats of the story as it winds up, too, were just masterfully done. This is one of the few books that I absolutely loved to no end that I hope there is absolutely no sequel to because the ending was so perfect and made so much sense and while I would like to know what happened next, I don’t really want to know because it will be much better left unsaid.

But while the plot work and story structure is what stands out above all, I would like to put in a word for some of the character work. I think the slow reveal of Carolyn’s true nature was really well done, especially the part where it turns out she doesn’t know her true nature and what she’s capable of herself. Obviously everyone in this novel is horribly flawed, but the fact that there are still more flaws that aren’t being faced was really powerful. Not to mention a very entertaining and weirdly poignant secondary cast. Erwin is a cinematic type character and work of genius- I hope this book gets a movie made out of it just so someone has the opportunity to say some of his lines out loud. What a waste if they didn’t! Steve is memorable and affecting and hilarious (and oh my god- his ending! I don’t want to say any more, but those of you who have read this, let’s talk below about how much we love it!), Margaret and David are burned into your brain whether you want them there or not, and Father…. Well. This is one of those times I want you to complete the list yourself because there are more names I could add, but I’d rather you find them for yourself.

The reason I’m withholding the fifth star is basically only because of some nitpicks. The “magic” (not really magic, I know) was kind of hand-wavy and while some of the explanations/metaphors associated with it were funny, they never really made sense even in the abstract. Mostly it was amusing so I let it pass, but as its role became stronger it became harder and harder to ignore. Also, while I love some obscenity as much as the next person, I do think that Hawkins could probably rely less on having his characters use as many iterations as he can of the word”fuck” to get a laugh -it got less funny as he went on. I also think that fleshing out the other siblings who didn’t get as much screen time would have been worth doing- the book could have been a little longer and spent a little more time setting up all these characters- it would have just made what happened later all the more heartbreaking. I think that was a missed opportunity.

But you know what, none of that really matters, in the end. I had to think about it to really come up with anything that bothered me. If this had been a movie, I would have walked out of it excited and high-fiving people with overflowing energy. I basically did the equivalent of that in my own home, which amounted to a lot of babbling to my husband and leaping about, gesticulating wildly, and repeating “fucking amazing” a whole lot (I guess he infected me with his favorite word by the end).

Unreservedly recommended to fantasy and sci-fi fans, urban fantasy fans, hell, even action/adventure fans. I’m stoked to see whatever crazy universe Hawkins comes up with next.