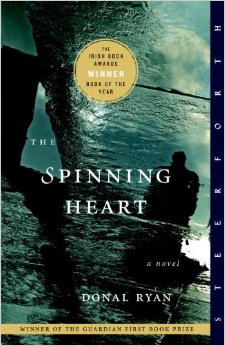 Reason for not picking up: Well, if you read the back of this one and it coming out at the time when it did.. its hard not to feel like you’ve already read the thing before you start.

Reason for finally picking up: Glorious reviews over a period of years (not even just when it was getting awarded All The Awards), the fact that the Irish heritage instilled in me for years makes me eventually pick these things up anyway, and the fact that I needed something short to read on a road trip.

Verdict: Yet ANOTHER case of how me being smug and oh-so-clever nearly made me miss out on something great.

The way we consume national cultures has always been fascinating to me. National identity as a pre-packaged product and lifestyle, national identity and history as a foundational rationale for political moves, this idea of a constructed identity somehow being “natural” or something that lives in our very very alike bloodcells. (Man, did anyone else read that BBC study where some scientists triumphantly pointed out that the gene pool of the British Isles countries that had fought each other forever over their differences were, essentially, 99.9% exactly the same? I had a lot of conveniently ignored and forgotten emails on the day that thing came out.)

Modern Irishness is definitely one of the most consumer-produced, artificial things that I’ve seen depicted in popular culture. I mean, St. Patrick’s Day is obviously the grossest and most extreme representation of the lot, but the other signs are familiar too. Green things, sad violin and tin whistle music, flannels and fishermen’s sweaters, dark farmers and darker pubs, lilting voices and people who don’t move their hands when they dance. And, having grown up amongst festivals of Irish nostalgia, I can promise you that I’ve spent hours and days seeing just how genuine it feels to many people.

And of course there’s a kernel of truth- many of these things were real before they became a performative identity- or at least real to enough of an extent that it counts.  But its hard not to feel like so much of it is a put-on, something that makes money and is a self-perpetuating fantasy.

But this book deals with something that is genuine and true to Ireland, something that is undebatably real and true to the verifiable facts of the country, and something that has underlain all the rest of the nonsense and given it life for centuries: Ireland’s history of defeat, miserable poverty and emigration. Sadly, that is all too real, and still continuing.

Donal Ryan’s book is set just after the worldwide financial collapse in the late aughts and details how the breakdown of credit and business growth affected Ireland in particular. He does this by telling a rotating tale of 21 different stories told by people connected together through a local village in the provinces and the jobs and families that surround them. Almost everyone was connected to a local construction company that went under as everyone’s credit and ability to buy failed, and of course that affected the lives of dozens of people. There are a few stories that continue throughout the book, as each character gives us a little more information about what’s going on with a particular plot (at least from their point of view), but for the most part, these act like somewhat interconnected short stories.

Ryan makes each voice seem unique through a combination of the judicious use of dialect and specific Irish slang, a clear and usually quite sharp change of perspective each time, as well as the change in the rhythm of his words. His first-person point of view perspective was an excellent choice- this is the sort of story that needs the visceral, emotional, and yet inevitably quotidian reactions people are living with as they try to make sense of the disaster that has befallen them and their families.

The stories are almost uniformly quite dark- as, I would imagine, you might expect when you’re inside the heads of a large group of people whose future and hope has been taken away from them. Even characters who are routinely held up as examples to the community spend most of their time thinking about killing their relatives, committing crimes and other forms of magical thinking that will get them out of this mess that is not at all of their own making.

So I would caution you that these are not stories, for the most part, of the noble poor. No, Ryan does an excellent job of making them people, who are no better, or worse, as a group, than others. Many, many of them are small and petty. Others are not very bright. Still more are mean, gross, entitled or eternally complaining. But he also does a wonderfully heartbreaking job of making these people affect you anyway- because you see how they got that way, even if you only ever get hints of it. A passing familiarity with Ireland’s culture and history and a few words dropped, are, sadly, more than enough to give you the whole story. There’s all the repressive effects of prejudiced, isolated, powerful Catholicism here- still tearing rigid, disapproving parents apart from their children (especially the ones who ever make something of themselves, especially the ones who escape to the city). There’s the inevitable outcomes of a clearly ineffective education system, and an atmosphere where intelligence and success at school are viewed as something to be hidden, lest you get “above yourself” and think you’re better than anyone around you. (There’s a completely shattering scene where a child tells his father that he did well on a test at school, beaming at him and wanting congratulations and is beaten for the “sin of pride”.) And of course there’s the years and years of grinding poverty and unending work that sucks the life and soul out of everyone and gives their children lifelong grudges and hatreds that they pass on to their own children and so on down the line. The constant, open misogyny constantly shown towards women, where sex cannot be far from the conversation if they are ever mentioned at all. And of course the emigration. The emigration that had, miracle of all miracles, become actual immigration for a few years. It’s difficult to overstate what that would have meant to a country that has been forced to send its children away for generations in order to have a glimmer of a half of a chance of something. Their closest thing to hope has been to know they will never see their children again. And then there was immigration? I remember reading wondering stories in the New York Times about this trend, with Irish men and women beaming with pride, hardly able to believe it. And, after only a decade, this apparent miracle came crashing down on their heads…. sending them right back into the story they’d apparently finally escaped from.

I would be lying if I said that these stories were powerful all on their own- they are in part affecting because they are basically mythic. They’re just one more example in a long line of stories we already know. We’ve heard these voices before- maybe not rendered in such a convincing way. Maybe not told with televisions and telephones in the background rather than ships and farms and famine cottages, but we all know how these stories end. They  never end differently.

I was reading Angela Carter’s Bloody Chamber a few years ago, and there’s a part where Carter writes that she wishes that Juliet would just rise up and walk off her bier, that Tristan and Isolde would refuse to drink the love potion or die this time, refuse to be controlled by a seemingly inevitable fate that lead them to their doom every single time. I thought about that while reading this- part of its power is that we, too, have seen these characters go through this time after time and know how it ends, but we’re still watching- and why this particular iteration of it hurts so much, because it seems like finally they might escape this “inevitable” fate that history and our expectations set for them.

This isn’t a perfect book. Ryan’s writing and some of his characters can get occasionally repetitive. It is a short book, but probably could have been even a few chapters shorter (there were a few characters who didn’t add very much to the emotional resonance of the novel and were clearly there for plot reasons only), and the “spinning heart” metaphor never really made much sense/was particularly effective to begin with, or the next four times it was repeated. I also think that he strayed a little into some things that did not feel true- they feel like the kind of truth you see on the news or read op-ed pieces about, but not actually real life things.

But by and large, this was emotionally engaging, easy to fall into and easy to keep reading for hours until I finished. The stories will feel familiar, but they won’t feel cliched- they’ll, by and large, have the kind of truth that you look to find in first-person narratives, and they won’t cross the line into sentimentality. They press the feels button pretty effectively, and do it over and over again. It will take you an afternoon to read, and you’ll think about it for the rest of the day and I can’t imagine you’d feel you wasted your time.

Whether or not you have a connection to Ireland and its past, I think you’ll find a connection to these people easily. And that, after all, is the most that we can ask of a book.

iThere are no comments